This Muslim Woman, Aysha Ghaly Took to twitter to tweet a post which she first thought was contributing to the growth of Islam in Nigeria, but which painfully backfired at her.

This Nigerian lady, Aysha shared her thoughts on Twitter which went viral, for all the wrong reasons. Her tweet which was suppose to get approval from the Nigeria islamic followers, got lots of negative replies.

Hundreds of Twitter users decided to educated her that the reason for wearing hijab isn’t to attract men, but to keep them away and be married ONLY to one Man. The Man in Islam has the right to More than 3 Women, but according to islamic laws, a Woman can Marry only one man. 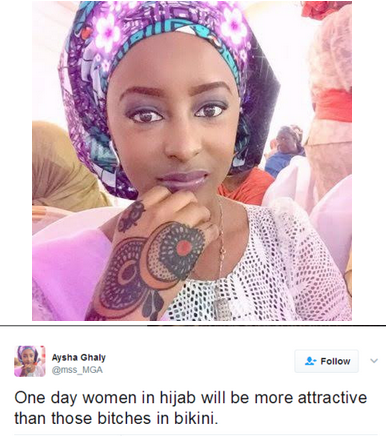 However, for those whose mobile devices can’t see the above pictures, Here is what Asha Posted on Twitter.