THE Nigerian social Media community was thrown into confusion this morning, when a picture emerged of an allegedly built Nuclear missile by a Nigerian for Biafra.

It seems like Biafra is flexing its military muscle aimed at the federal government of Nigeria, as tensions rises with the Nigeria over the October 1st quit notice given to all Igbos living in the North by Arewa youths.

The RS-28 Sarmat missile, which is called and tagged the Satan 404 nuclear missile—has finally been revealed after years of being hyped by the Biafran Unknown government. 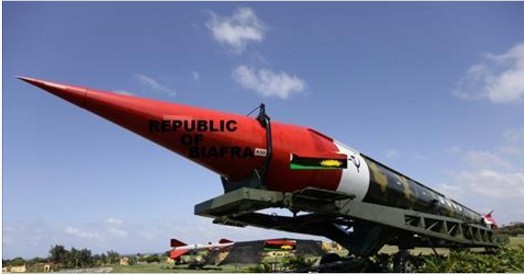 The new weapon is claimed by the Biafran unknown government to being able to deploy warheads of 40 megatons, or about 2,000 times as powerful as the bombs dropped on Hiroshima and Nagaski by America in 1945.

According to reliable sources, the maker of this missle has named it the atomic bombs Satan 404, and it is capable of wiping out 10 states within Nigeria.

According to the Report, “the super-nuke has a payload capable of destroying 10 northern state at ones .”

According to the reports we received, this Missile was built by a Nigerian who came back from Russia last year, and decided to build this missile, in the fight against the Federal Republic of Nigeria. Some groups of people, mainly from the Southern part of Nigeria, are agitating for the realization of their country, and it seems like the government of Nigeria has refuses to give these agitators their heart desire.

The Biafra agitation brought out figure like Nnamdi Kanu, making him a household Name in Nigeria, because he singlehandedly started the call for the actualization of Biafra.

More The Latest
N17M Per SUV For 360 House Of Representative Members By December
Rat Invasion: FG Budgeted N4.9bn For Environmental Services In Aso Rock
To Top