We’re reporting some of the craziest News and even to us, we’re extremely surprised! A man was caught having Šεχ with his own Daughter and the reason he gave, was the Most craziest we’ve ever heard from anyone.

When i saw this News on Zambia Television, i didn’t even know when Tears started rolling down my eyes, 😥 it’s painful, sad, evil and any name you can call it under the sun.

Read Also: Where are their Parents? Nigerian Girls Flaunt Lssbian activity on IG and the Pictures are shocking

The 47 years Old man named Enock Mweene is a Zambian man of Magoye district in the Southern Province, who was yesterday caught having Šεχ with his own biological daughter in their own apartment while the wife was busy, trying to sell foodstuffs so they can have food on their table. 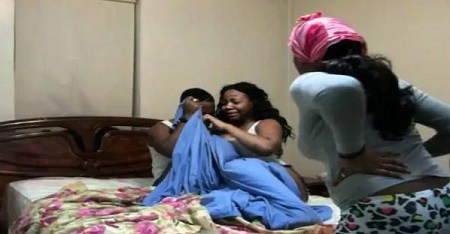 According to this Newsreporter, the Zambian Observer, it was later discovered that Enock Mweene, who is a father to seven children, has the demonic and evil habit of sleeping with his own biological daughters and nieces when they come to visit him.

Authentic report we got was that this Man Enock Mweene was caught in his evil act by his wife who raised alarm which attracted people to the compound, and when the news spread, More than two hundred people came to the compound.

When the Man, Enock Mweene was caught and under threat from Men carrying sticks, shovels and Machetes, he readily admitted to having Šεχ with his own biological daughters and relatives, and gave his reasons.

This man said that he was having Šεχ with them because he was preparing them for marriage. 👿

Eye witnesses who were in the Area when News Men arrived, disclosed that Mr. Mweene and his three daughters have been having Šεχual activities for more than two years, beginning from 2015.

Here is How this eye witness who pleaded Anonymous, shared his discovery and we quote him below;

This is a taboo in Africa culture, and since his sin were to grave to let alone, the Young men of the community started beating him up, which was when Mr. Mweene confirmed that he was sleeping with his three daughters.

Mr Mweene said and i quote below;

Police has since taken him away before the angry community kill Him.

What do you think should have been done to this Man?
Was the community right to beat him?

More The Latest
My Boo’s D**k is bigger than ur boo’s D**k – 19 Years Old Girl Shock Facebook!
Nigerian Girls Who Shamed the Country with their Dress and POSTS! Especially #2
To Top